You remember this dresser--the one I called the project from HE double toothpicks? 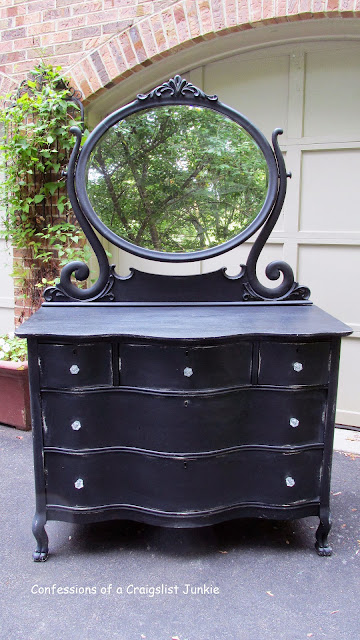 Well it had a partner in crime:  a matching highboy with a mirror.

I didn't get a before photo of this one either, but here it is without the drawers, after I primed it.

And here are the drawers before priming.

Learning my lesson from the first piece, I primed the dresser first with Kilz to keep out bleed-through.  I also learned something new from a comment I got from a representative of Kilz.  I always thought that if the bleed-through showed through the primer, it would show under white paint.  Apparently I was wrong, as she explains:

My name is Katy and I'm the social media coordinator for KILZ brand products. I noticed that you said that the bleed-through was still showing even after you primed with shellac and KILZ. In regards to primer consistency, primers don't have to be opaque to do it's job. It's very common for people to look for a 'blanket of white' primer coating, but it's not specifically relevant. It's one of the most common misunderstandings. We have a product called MAX Clear that blocks stains from bleeding through paint, but it dries clear so it doesn't hide at all. You want to be concerned if the primer has a watery, milky consistency after it has been stirred. We would be happy to discuss this further so please contact us directly at ask@kilz.com. Thanks!

Good to know for the next time I'm painting something white.  And if you ever have a question about Kilz, they'll be happy to answer it for you!

Anyhow, this piece went along pretty smoothly.  I primed it, then painted it with the General Finishes Milk Paint in Lamp Black, like I did its partner.  I then wet distressed it to show some of the white under the black, and changed out the knobs to some pretty vintage-looking crystal ones.  It was good to go.

Or at least I thought so ...  I should never underestimate my ability to mess things up!

I was taking the mirror off to clean it, when I had a little, um, mishap.

I forgot the "righty-tighty, lefty-loosey" rule.

I know ... dumb. And I have no excuse other than I was watching "Love it or List it" while I was working on the piece, and I was all caught up in whether the couple's marriage would survive their housing dilemma--and if it did, would they love their house or list it?  It was a cliffhanger.

So while I was watching--holding my breath for their decision--I tightened instead of loosening. And I put a big ole hunker chip in the mirror.  Not only that, when I got it off and started looking at the damage, the whole dang thing fell apart.

Well on to Plan B, which is a dresser with no mirror.  I filled the mirror holes, and primed and painted the area that was under the mirror frame.  Then I did another couple of coats on the top.

It's really a shame, because it was a pretty mirror, but it still looks nice.

On top of everything else, the photos I took outside today in the sun were overexposed and you can't see a thing. (My luck with these dressers has been totally lacking!) So here it is in the shop:

And here it is next to it's match at Mr. P's Emporium.  Both are for sale now.

So the couple decided to list the house (although I'm still not too positive about the future of their marriage), and now I have an empty mirror frame I need to figure out something to do with.

Posted by deborah@confessions of a craigslist junkie at 5:59 PM