You Meet the Most Interesting People ...

One of the things I love about Craigslist and thrift shops is the people you meet -- literally and figuratively. This painting led me down a road to "meet" a true character. 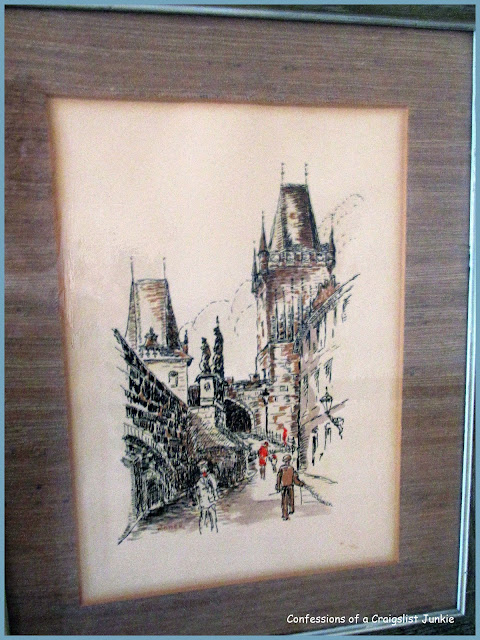 Those aren't marks or stains in the painting background  --
I apologize that I haven't learned how to take a photo of artwork without a reflection!


I found it at a Goodwill for $7.96.  It's a watercolor, and I think ink, of a street scene in front of old towers in Prague.  I picked it up because it was mid-century in it's original frame and original bark cloth matting ... 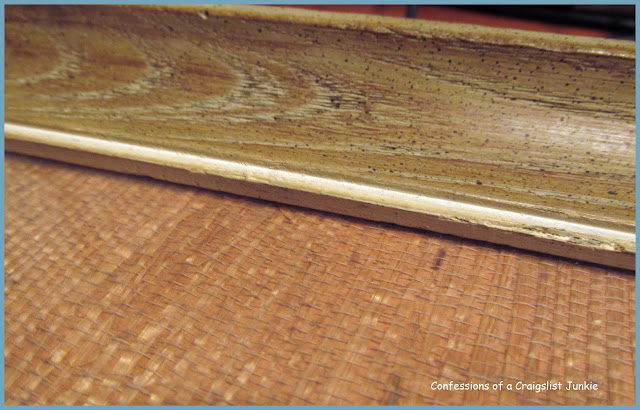 and it had the original label from the artist's shop on the back. 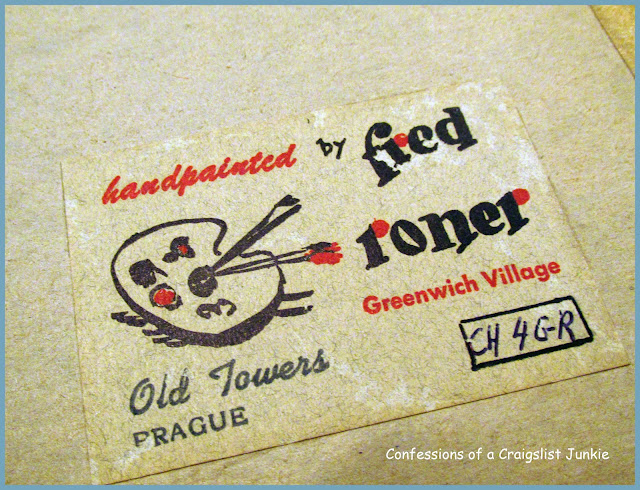 It says "Hand Painted," but there is also a number.  I don't know if that means it's a print, or if that's an inventory number. 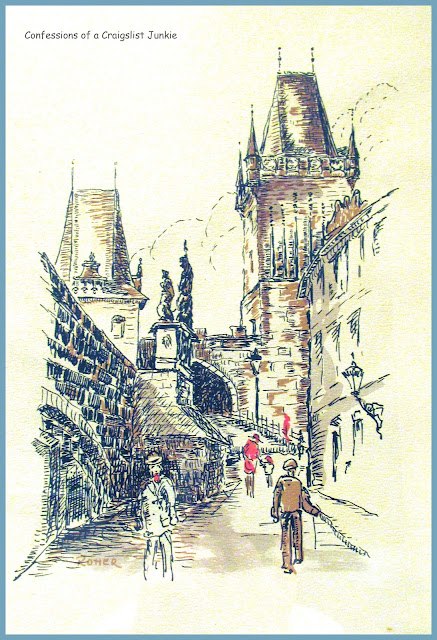 I loved the red accents and the detailing like the man with the ascot and the mother leaning over to talk to the child. 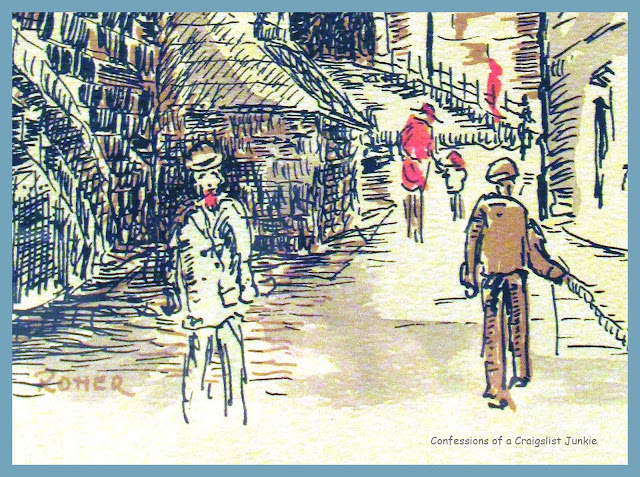 I had never heard of Fred Roner at the time.

Then last week I saw this painting on One Kings Lane. 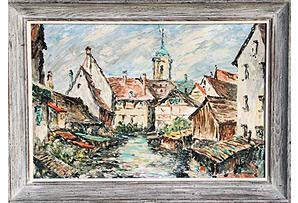 I don't know if you know about One Kings Lane, but they sell designer's picks, home accessories, and vintage goods.

As an aside and FYI, their prices on their vintage goods are typically high.  For example, I just sold this hammered aluminum ice bucket made in Italy. 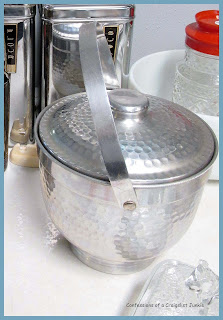 I sold it for $29, which I had researched was about the typical price for the piece. I was feeling pretty good about it since I had picked it up at Goodwill for $3.96.  A few days ago the same bucket was on One Kings Lane with an original price of $140 or something, and a sale price of $59 -- and it sold!

I was feeling really stupid, thinking maybe I had missed something, so I double-checked everything.  Sure enough it was by the same manufacturer, in the same condition, and selling on Ebay and Etsy for around the same price as I sold it for.

But if their dealers can get those prices, I say more power to them! I do find them a good resource for learning what things are and what is selling; they have beautiful things, and their prices on their new items can be pretty good.

So anyway, I digress.  (I just get so carried away when it comes to finding bargains!) 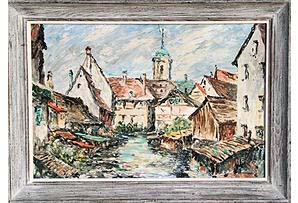 As you can imagine, that got my attention! I thought it might be the same guy who painted the piece I had found -- checked, and sure enough it was 'ole Fred!

So I decided to do some research. And I'm telling you, Fred lived an interesting life!

He started painting as a school boy in Vienna, and he eventually became what he called a "Four P Artist:" Painting pictures -- and picking pockets!

He was in business manufacturing shirts in Vienna when he started doing magic shows as a sideline.  Just a guess, but I'd think shirt manufacturing would be pretty dull, especially for a creative guy like Fred.

The competition among professional magicians was tough, so he decided to learn a cool trick where he made a card disappear and reappear in the wallet of a innocent bystander.  But to do it, he had to learn how to pick the pocket of the bystander.

So where do you learn how to pickpocket?  At pickpocket school, of course!

Off he went to a school of professional pick pockets in Warsaw Poland.  The school was run by former criminals who now taught "the fine art of filching."

He learned the trade, but once back in Vienna in 1938 he saw the city police wearing arm bands with the Nazi swastika. Fred figured it was time to get out of the country.

He and his wife fled to the Yugoslavian border, then made their way to Belgium with Maurice Chevalier by pretending they had an engagement in the country.  They eventually made it to the U.S. via Paris and London.

Sadly, although Fred was able to get some close family members to the United States once he was here, 17 relatives vanished during the war.

Fred took his magic act to Vaudeville and made quite a name for himself.  Soon he was playing all the top night club and stage venues in New York and across the country -- billed as "The World's Greatest Pickpocket." 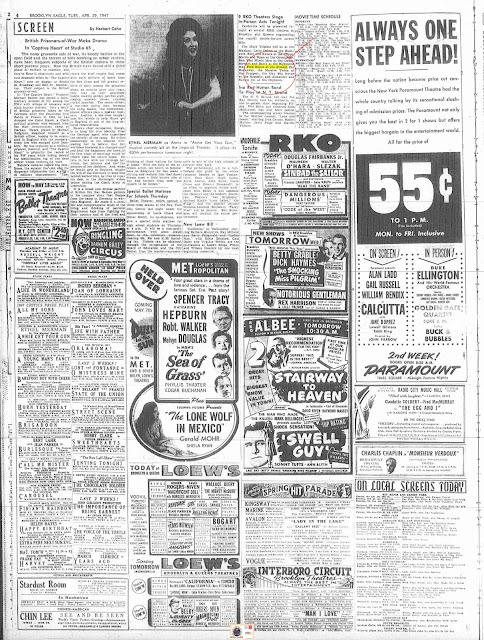 
And Fred not only entertained audiences with his skill, he also helped police across the country solve pickpocket crimes.

All along, Fred continued painting, and eventually opened his store in Greenwich Village in New York City.  Soon he was garnering fame as a painter, as well as a magician.


So now I have a Fred Roner watercolor or numbered print. 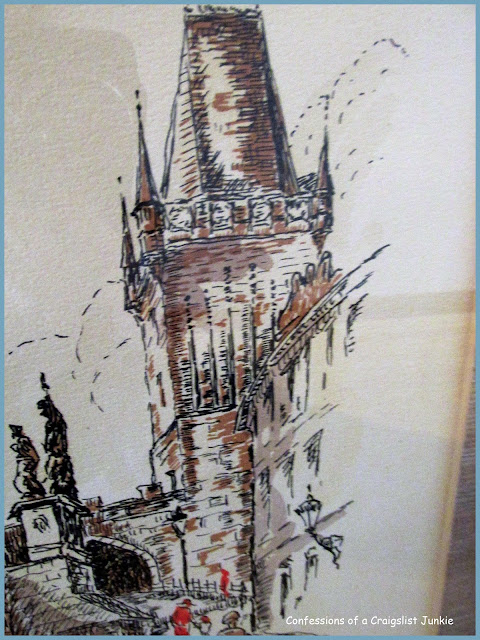 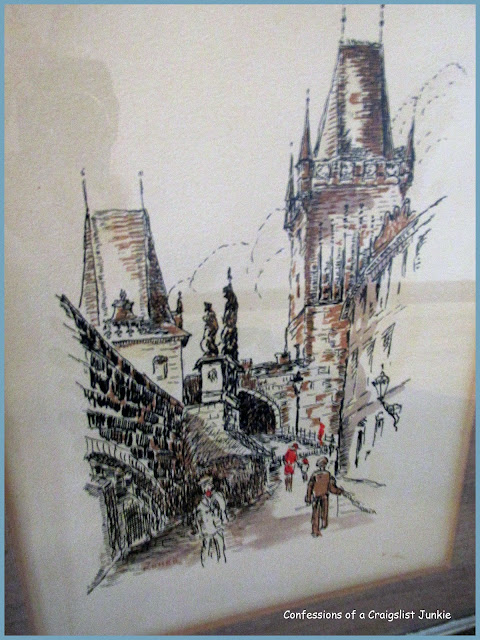 Despite my research, I still don't know its worth.  But it doesn't matter because I'm thinking I may just keep it.

Even though it doesn't really go with my decor, it's a small connection to an amazing man.

If you live in Northern VA, check out Mr. P's Emporium's Facebook page for a deal I have going this weekend.  And as always, if you haven't liked Mr. P's  Facebook page, I'd not only like it -- I'd love it if you did!

Posted by deborah@confessions of a craigslist junkie at 4:01 PM