This mid-century dresser makeover has got to be one of the favorite projects I've done. Unfortunately the photos do not do it justice.
I snapped some quick shots when I first took the dresser out to the shop, but since it was pretty busy that day I just hurried and replaced merchandise and planned to take some more photos later.
I quite was disappointed that I didn't get the chance.  Well, kind-of disappointed.
Oh, who am I kidding?  The very day I was going out to take some better pictures I got a phone call that the dresser had sold and I needed to bring out another piece!
It sold in three days!  And I'm sorry folks, but a sale trumps a blog post any day!!
So here's the story of the make-over of my record-breaking selling dresser--and the first dresser to sell out of my new space.
I found it at Goodwill for $60 and it was in what I thought was comparably great shape.  Some veneer was chipped, some water stains, but nothing big. 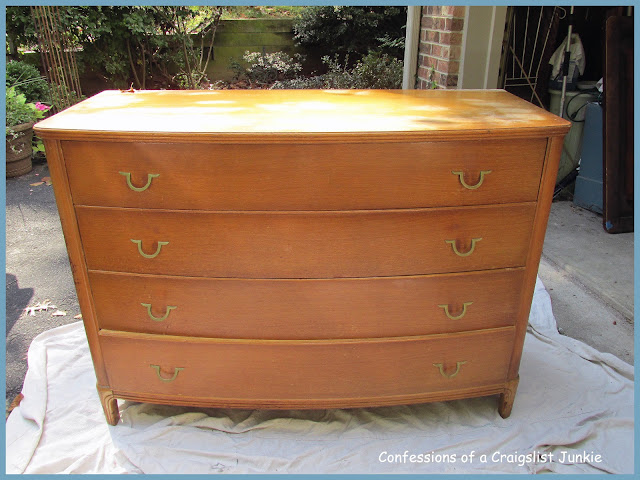 It's a good size, heavy dresser with dovetail drawers. 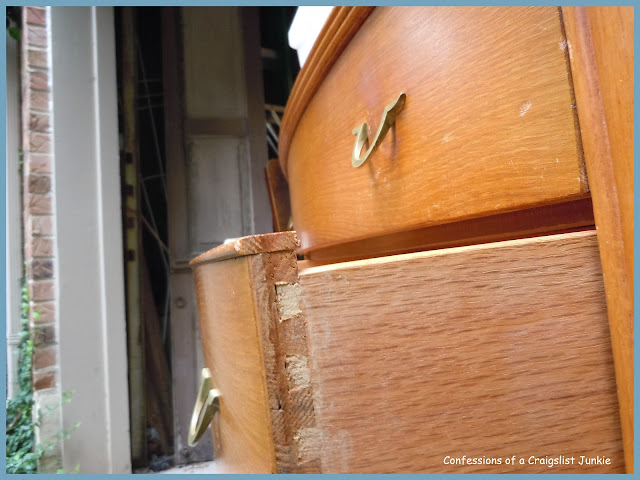 The top drawer has built in dividers. And I loved the drawer pulls. 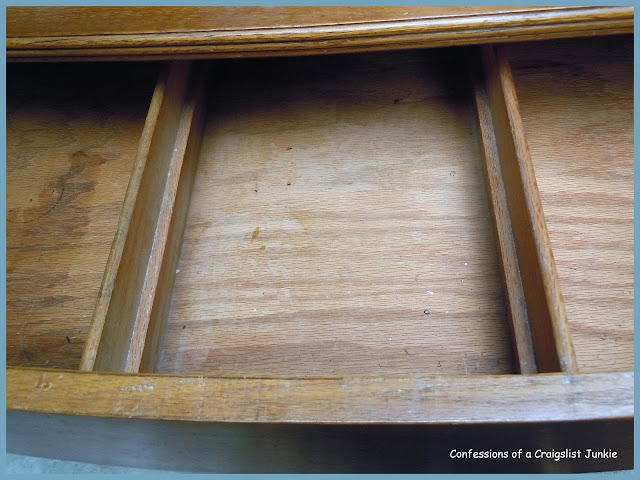 However, as they were loading it into my car for me I noticed a major flaw.  A dog had chewed a big piece off of the bottom of the dresser by the back leg.
I forget to take a photo before I started to do the repair, but you can get the idea here: 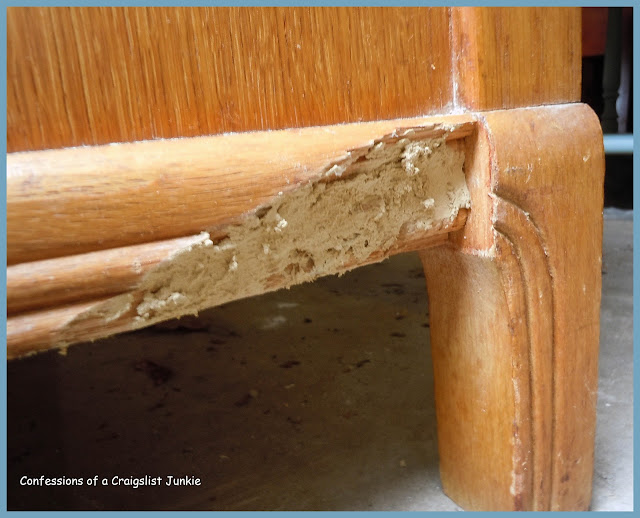 I had never dealt with a fix like like this, and wasn't sure what to do.  Because it was such a large divot, I decided to use Plastic Wood for the first time because it is stronger than wood filler and you can mold it.  Warning:  Use this in a well-ventilated area.
I had to build up several layers, and I tried to mold it to the existing design.  As you can see, that didn't work too well the first go-round. 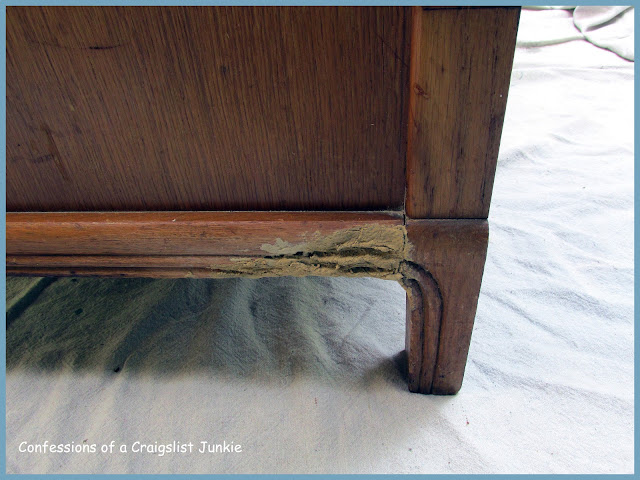 I ended up sanding most of it down and starting over again.  But now that I know more of what I'm doing, if I took more time, I think I could do a much better job matching up to what was there. And it did do a great job of filling in the hole, which was significant.
The veneer was missing in places on the top, but I didn't want to bother with chipping off the entire top piece. So I just filled in those areas with wood putty and glued down any loose pieces. 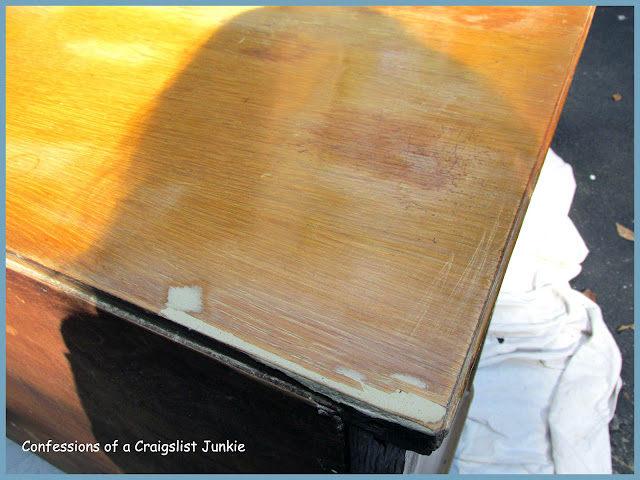 I then sanded everything down so the top was smooth and even and I could make sure everything was permanently adhering. 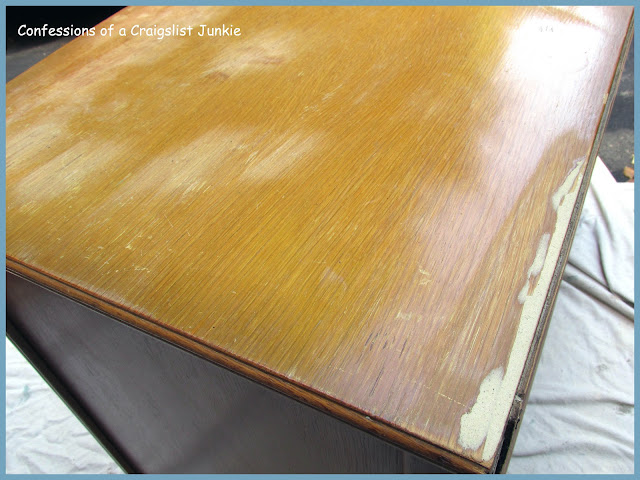 I painted the base and top of the dresser in ASCP French Linen.  I painted three coats on the top, then waxed the entire piece with  ASCP clear wax.  I took a lot of time with the waxing on this piece. The finish was so smooth and lustrous looking on the top--which is one of the reasons I wish I had better photos! 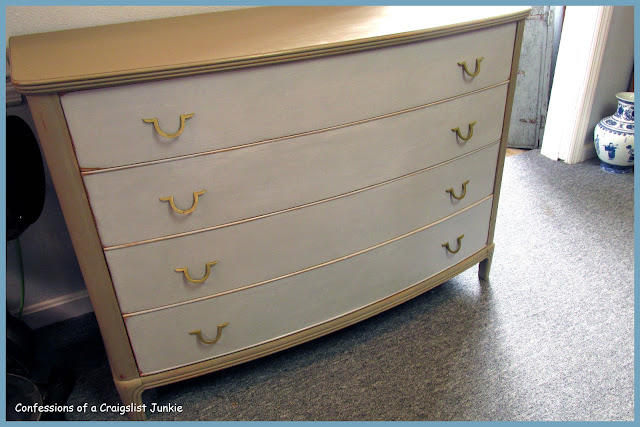 The fix on the hole at the bottom turned out okay, not great. Luckily it's not noticeable because it is at the bottom and at the back.  Most people don't squat down and take close-ups of the bottom backs of their dressers. But I priced it accordingly anyway. 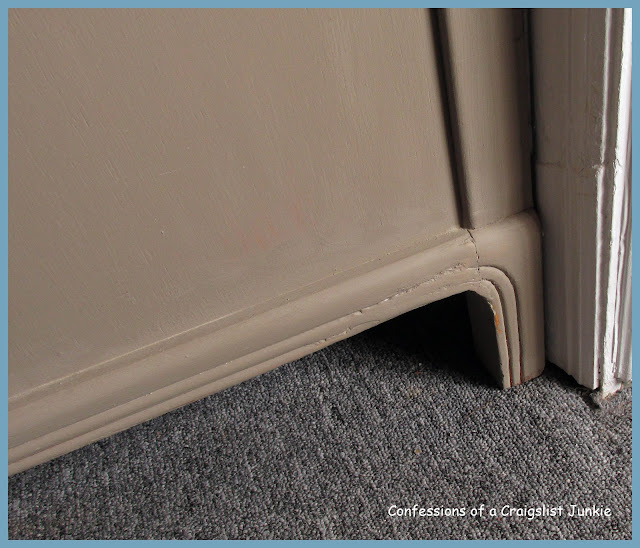 On the drawers I used ASCP Paris Grey.  When I waxed the drawers, for some reason the wax gave them a bit of a washed effect, (which unfortunately you can't see in aforementioned crummy photos!) which I actually loved.  Then I distressed the entire piece, going a bit heavier on the edges of the drawers. 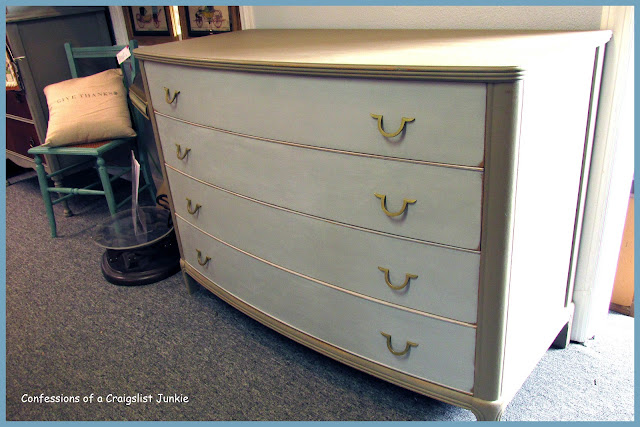 When the outside was finished I painted the bottom of the inside of the drawers in French Linen to give them a fresh, clean look.  The final touch was putting the cool original drawer pulls back on. 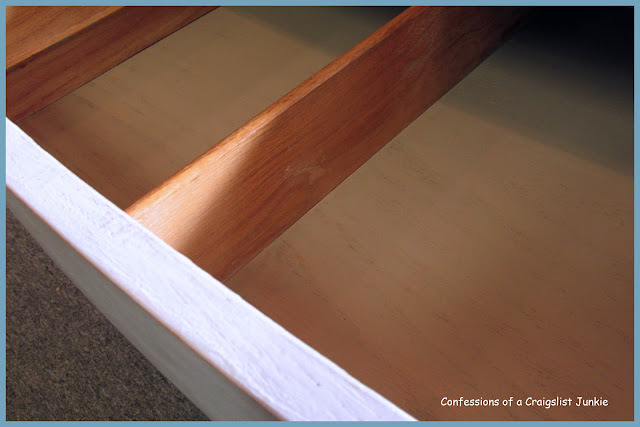 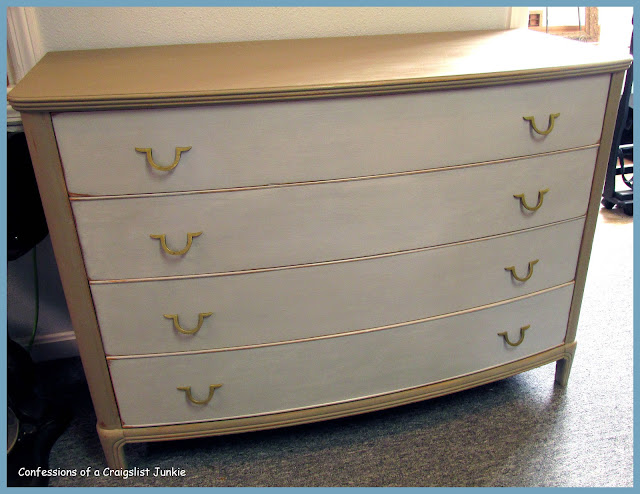 And that's my record-breaking selling dresser.  It's a great transitional piece. I really did love it, and was thinking I should keep it and put it in my son's room since the colors match the new bedding I bought for the room exactly.
Oh well!
Sharing at:
Primitive & Proper: POW
Domestically Speaking: Power of Paint
Elizabeth & Co.: Be Inspired Tuesday
Miss Mustard Seed: Furniture Feature Friday
Redoux: Link Party
French Country Cottage: Feathered Nest Friday
No Minimalist Here: Open House Party
My 1929 Charmer: Sunday's Best Party
Elizabeth & Co: Be Inspired
﻿

Posted by deborah@confessions of a craigslist junkie at 1:53 PM

Email ThisBlogThis!Share to TwitterShare to FacebookShare to Pinterest
Labels: Before and After, Great Finds