Hope you all had a wonderful Thanksgiving!
First of all I want to say thank-you to those of you who left such nice comments on my last post about our son coming back from Afghanistan.  If you didn't get a personal reply it's because you are a "no-reply" commenter (please consider changing that!).
We had a wonderful Thanksgiving. Our son is healthy and happy to be home.  Unfortunately we didn't get to spend much time with him other than Thanksgiving Dinner because his girlfriend and friends monopolized all his attention.  Funny how that happens!  :-)  But he gets to come home next weekend so we'll have more time with him then.
I thought I'd show you some photos of our Thanksgiving table setting.  There were just six adults at the dining table this year.
I kept the table setting pretty simple, with just a runner and placemats ...
﻿ 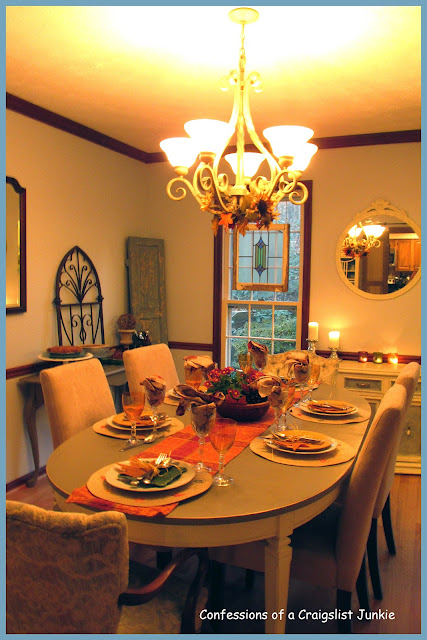 Flowers and pinecones for a centerpiece ... 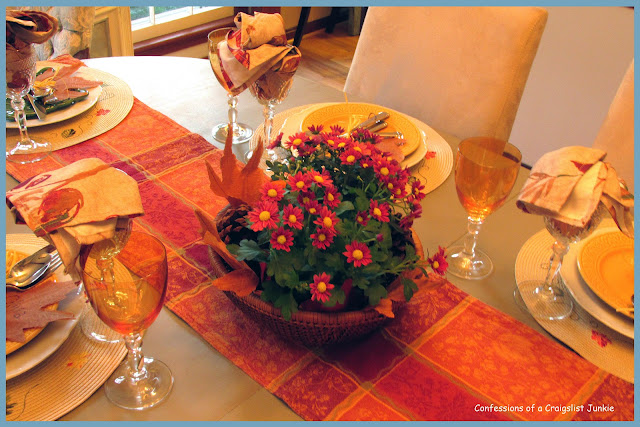 Silverware wrapped in raffia and paper leaves as place cards. 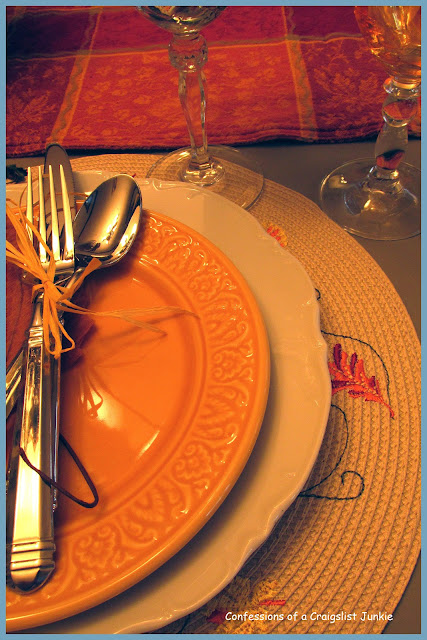 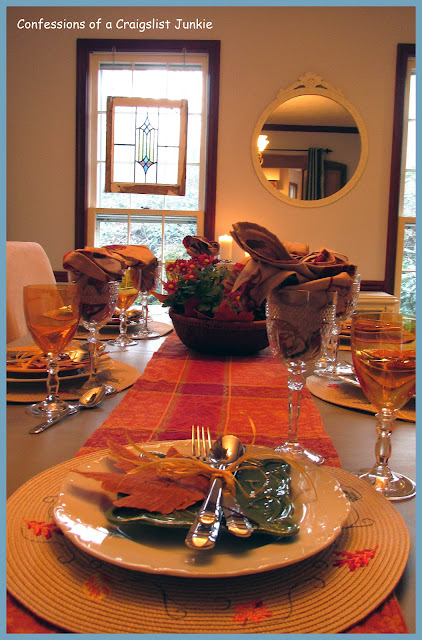 The napkins were too floppy to put in the wine glasses, but oh well! 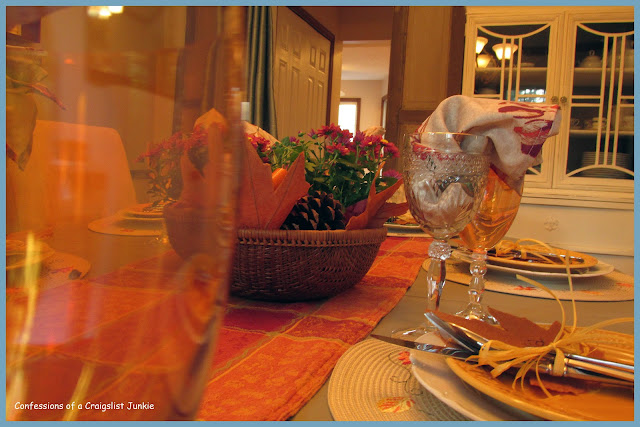 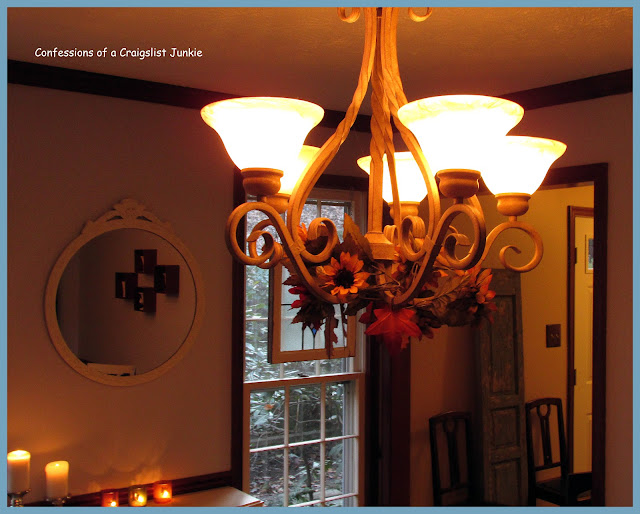 I brought the console table I showed you here home from Mr. P's Emporium to use as a dessert buffet table because our buffet that is usually in the dining room still isn't fixed from the movers breaking it when we had the floors refinished.  (Yes, it's been almost four months!) 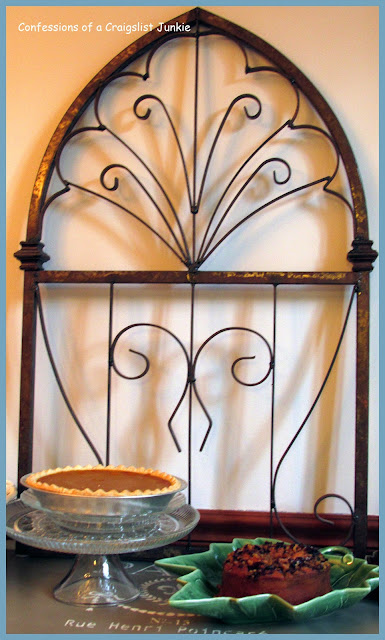 They told me it was done and delivered it last week, but upon  unwrapping it was obvious no one had done a thing to it.  I didn't say a word--the delivery guys just looked at it, wrapped it up again and said "we'll take care of it."  Hopefully that's a promise! (If you live in the DC area I will give you the name of a renovation company not to use!) 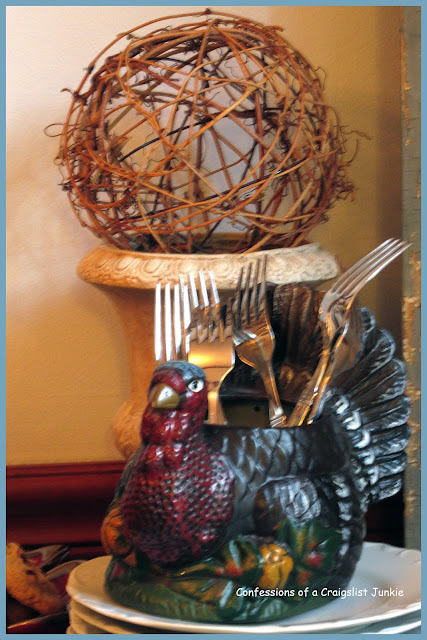 Anyway I decided I like the "Paris" console table in the room, and wanted to keep it, but my plans were thwarted. More on that in a minute.
On to lessons learned.
Now I will be the first to admit I am not the world's best housekeeper.  And between not feeling great with one thing and another for a few weeks, and making holiday ornaments, etc. for Mr. P's, the house was in bad shape and needed a lot of work to get ready for Thanksgiving and guests. 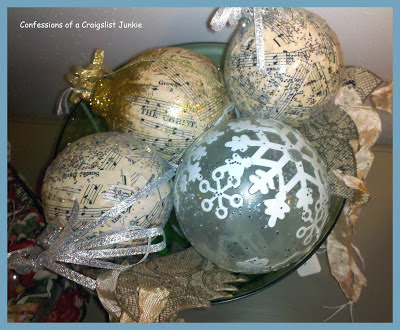 Phone photo from Mr. P's, but I needed something to illustrate!﻿


It was dusty. Doggy hair bunnies were floating around.  Glitter and bits of paper abounded in the dining room where I was making the ornaments.  And the kitchen had stacks of bins filled with merchandise for Mr. P's because I was washing, pricing, and packing it in there. 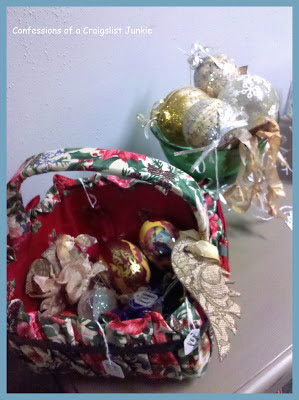 On top of all that, my son had left his room a pit.  Dirty clothes were strewn around the floor along with dishes, etc.  Now I know I've had 8-months to clean his room.  But at first my attitude was he could dang well clean his own room since he's the one who left it in that condition.
But then I was thinking:  How could I let that room be his homecoming after he's spent 8-months in Afghanistan -- for the second time?  I couldn't.
So between the loads and loads of laundry and the rambunctious doggy hair bunnies, something had to give house-cleaning-wise. I was under the wire and we had to leave to drive down to North Carolina to pick him up.
So that something was the master bedroom.  I was planning on shutting the dogs in there and there was no reason for anyone to go up there anyway.


(Otherwise during dinner Angel the golden retriever would be under the table putting her head on people's feet in the hopes that they would pass her some turkey and I wouldn't notice; Pepper the chihuahua mix would be dancing around the table on his back legs hoping that he would be so entertaining I wouldn't send him away, and that the guests would yell "Bravo" and throw him some dressing; and Mosby the lab mix would be dropping his slobbery ball in people's laps hoping someone would throw it for him.)


On Thanksgiving Day I was rushing.  I didn't even make our bed.  And the room wasn't just messy.  It was MESSY. 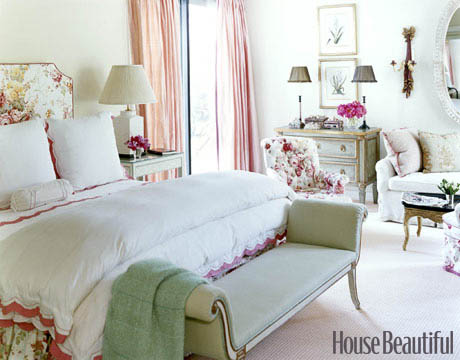 Obviously not my bedroom, but I'd like it to be!
I was planning on shampooing the carpet in there, so the carpet steamer was waiting for me.  Cardboard boxes from when I got my new computer were also waiting for me to put them in the recycling bins.  Stacks of paper were waiting to be filed in my office, which is off of the bedroom.  The vanity in the master bath was covered in pill and product bottles, along with the cleaning products I'd brought up but were waiting for me to use them.  And maybe most embarrassing, my snuggly "sleeping socks" (hey--my feet get cold!) were on the bedside table along with a stack of Twilight books.
You get the picture.  But  nobody was going to see it anyway, right? 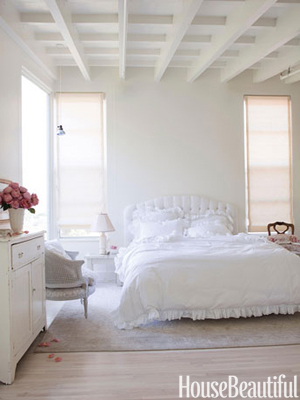 In my dreams.  Come on --I have a messy husband, three dogs and three cats!
As I was tossing the salad and doing the last minute prep for dinner, I realized that only my husband and one other person was downstairs.  "Where is everyone?"  I asked my husband.  "Oh Sophie," (the 3-year-old) "wanted to see the dogs so everyone went up to the bedroom."
So my lesson for today boys and girls:  If you're having company over and there's one place in your house that you'd be embarrassed for them to see -- count on the fact that everyone will congregate there!
And the console table?  That's my "yippee!" moment.  The day after Thanksgiving I got a call from the antique mall telling me I needed to bring out another piece of furniture because one of my dressers had sold.  The "Paris" table is now back at Mr. P's, and I'm doing a post on a "before-and-after" of the sold dresser this week.
My first sold dresser from the new space!  Yippee!!

Have a great week!
Posted by deborah@confessions of a craigslist junkie at 5:03 PM