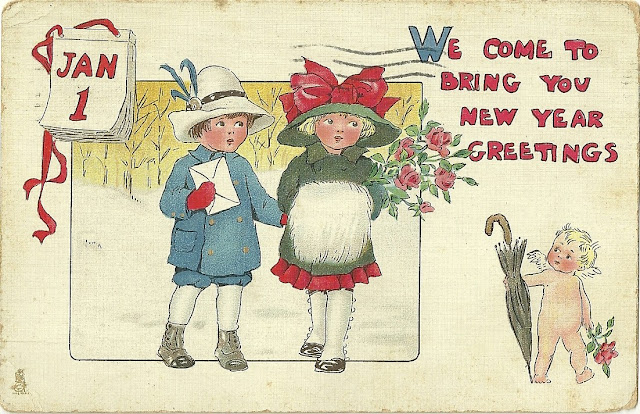 I love this old postcard. It's one of my favorites from my collection, and is from 1911--a true antique!  The writing on the back begins "Just a note to tell you I'm alive," and is written to the author's sister.  It's addressed with just the name, town, and state.  That was definitely back in the day!
Do you think they ever imagined a stranger would be looking at it more than 100 years later?  And then posting it on something called the internet for others to enjoy?  Boggles the mind!
Today I'll be cooking a January 1st family tradition: Black-eyed peas and greens.  My mom carried on the tradition from her mom, and I've carried it on from her.  It's a Southern superstition that black-eyed peas on New Year's Day brings luck, and the greens are supposed to bring money in the new year.
Although my mother was born in Canada and raised in Hawaii, and I was born in Hawaii and raised mainly in Seattle, my grandmother was a Southern lady from Georgia. So I grew up with a lot of Southern food and traditions passed down from her.  (Maybe that's why I feel right at home in Virginia!) And I'm pretty superstitious, so if something is supposed to bring me good luck, odds are I'll do it!
My grandmother was an amazing woman.  She put herself through college after her parents died, then took teaching jobs in places like Alaska and Hawaii.  This was back in the early 1900's--around the same time this postcard was sent--and that was pretty unusual for a woman at the time.  For one thing, just think about what it took to get to places like Alaska and Hawaii in those days!  Trains, then weeks on a ship.  She had a sense of adventure that never left her, even after she married, fairly late in life (very late in life for the time!), raised her young step-daughter and had her two biological daughters.
I never met her; she died before I was born.  But I so wish I could have known her. I was named after her (my middle name), and I like to think I inherited her "gumption" and love of seeing and doing new things.  I've never been afraid of change, and apparently neither was she!
So in that spirit, today I'm making the traditional dish and writing my resolutions for this year.  I'm thinking about the past and everything that has brought us to this moment, and wondering what adventures lie ahead.
Like the author of the postcard and her sister, I have no idea what the future holds.  But I want to take some steps to try to make this year the best it can be--and that's what my resolutions will focus on.
Of course, some black-eyed peas and collard greens can't hurt either!
Thank-you so much for reading my blog in 2012! May your 2013 be filled with family, friends and love.

Posted by deborah@confessions of a craigslist junkie at 12:54 AM