I've always loved those plucky English characters in old films or PBS series who, whenever they're asked how they are doing, answer in their cockney accent, "Just ducky dearie, 'ow about yourself?"

No matter what's actually going on with them, no matter what trials and tribulations, everything is always "just ducky."

So when it comes to talking about the new space for Mr. P's Emporium, I'll say that things are "just ducky," even though there's been a bit of a glitch.  Or "crossed wires" as I was told today.  Because if I keep saying that to myself, perhaps I'll believe it and not have a minor melt-down!

Basically what it boils down to is the space I was shown is not the space that is available.  (Just ducky .... everything's just ducky ... )  Since I need wall space, (there is a 4' height limit to keep site lines free in the open area, so because I have dressers and sometimes some larger pieces, I wanted a space along a wall where there is no height limit), the two spaces that are actually available are either 2' shorter or 5' longer than what I thought I was renting.

Now I have to decide whether I want to pay more rent and take the bigger space, or take the smaller space -- which has a window in it which I can't cover up, so that limits the wall space even more.  I mean, I wanted to start out small, but that's really frigging small!

Or I can just walk away. But whatever I decide, I need to do it quickly, because the plan was to move in on Friday.

As in the day after tomorrow.

So let's chat about something else ducky, shall we?  Duck Egg Blue Annie Sloan chalk paint.  Love, love, love that color.  I had part of a can left over from a previous piece I did, so I decided to do some "assembly line" painting the other day and did five smaller pieces with it.  Actually six if you count the corkboard that's the start of a project I'm doing.

This sweet little vintage corner table started out  with an unfortunate paint job that someone spent a lot of time on.  It's hard to tell by the photo but it had four different colors with iridescent accents. 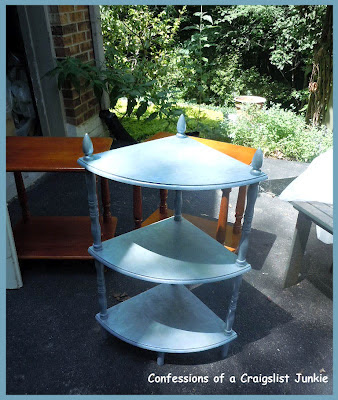 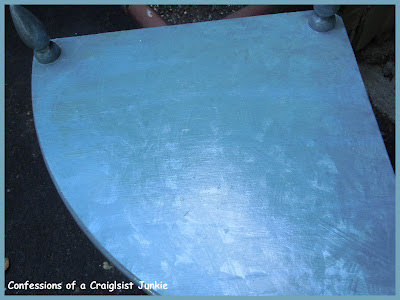 Personally, I just didn't think it worked.  So I gave it a new look with the Duck Egg.  I think it looks so cute and fresh now. 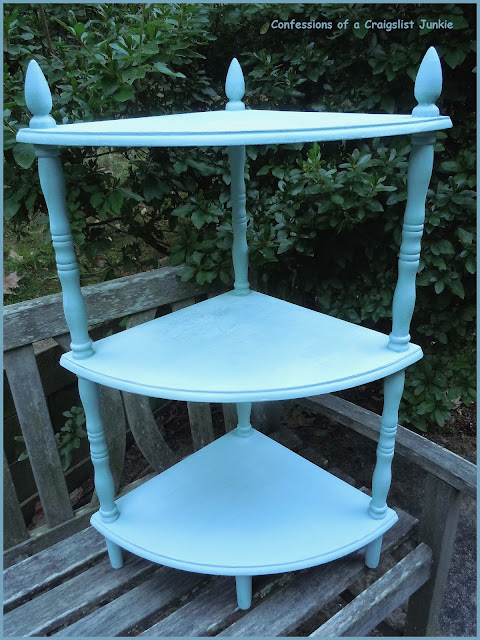 It would be great in a guest bathroom or a little girl's bedroom. 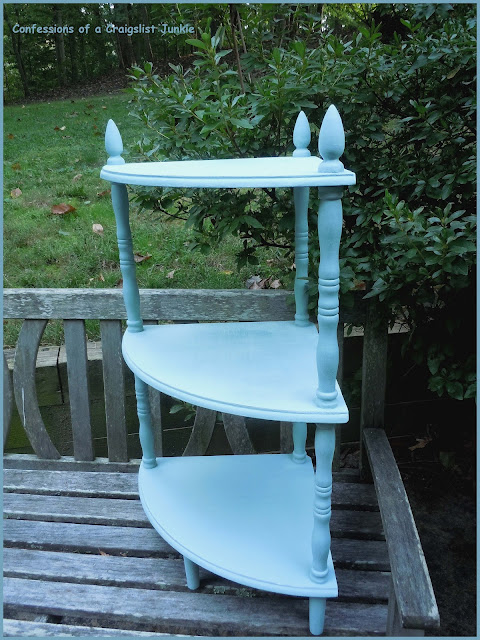 These two little maple end tables originally looked like this: 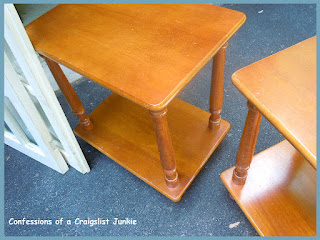 And now they look like this (although not the greatest photo to show the colors, the next one is better). 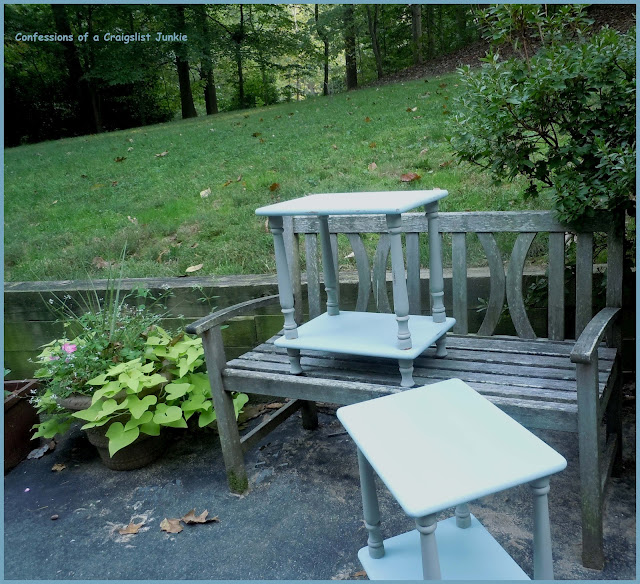 I painted the tops and the bottom shelves in Duck Egg, and the legs in French Linen, then lightly distressed the edges and legs. 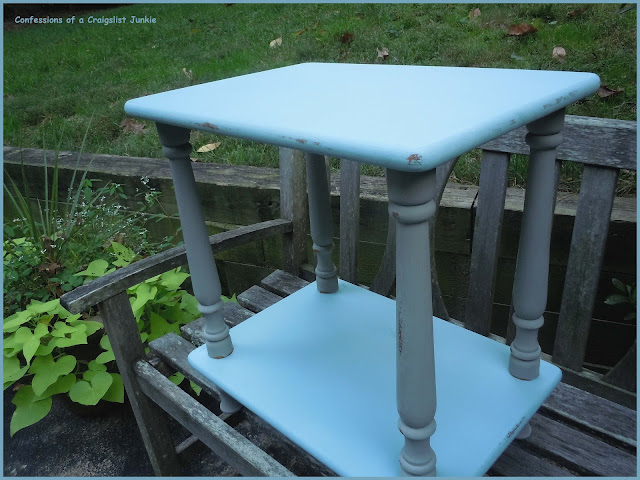 I didn't get a before shot of this mirror, but it was a light oak, and nothing to write home about. 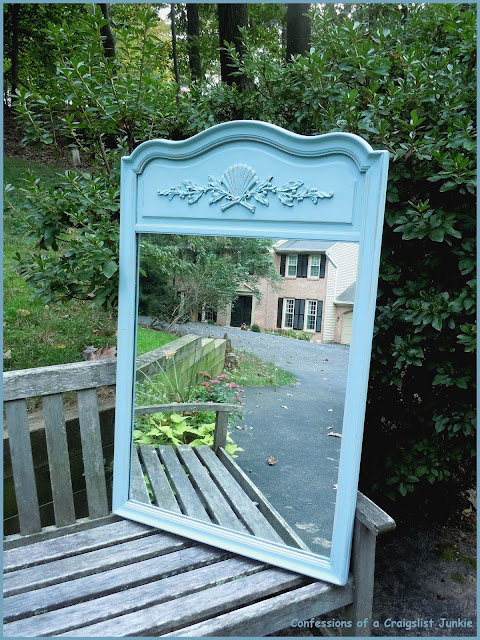 The Duck Egg Blue makes it much more special! 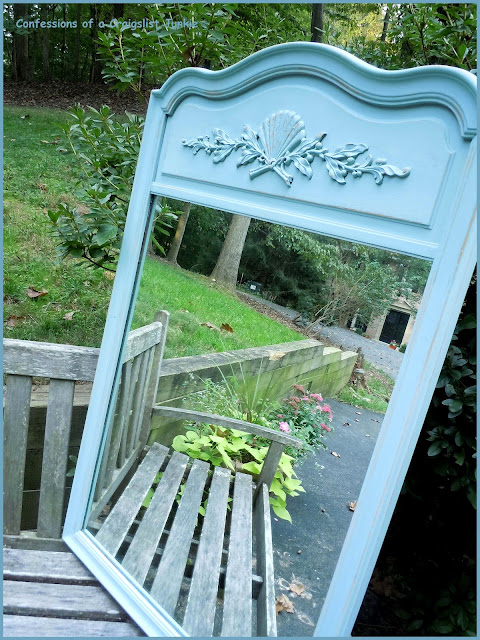 And the fan and vine detail pops much more with a light distressing. 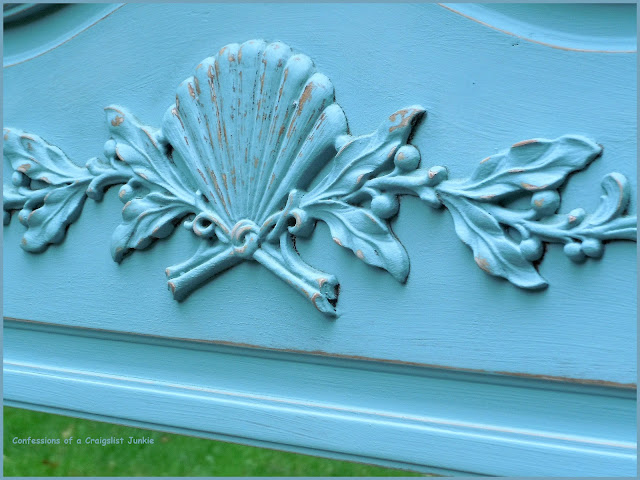 And lastly, I picked up this little wood spice rack at Goodwill. It was very, very sad. But I patched it up, gave it a paint job -- and it's adorable! 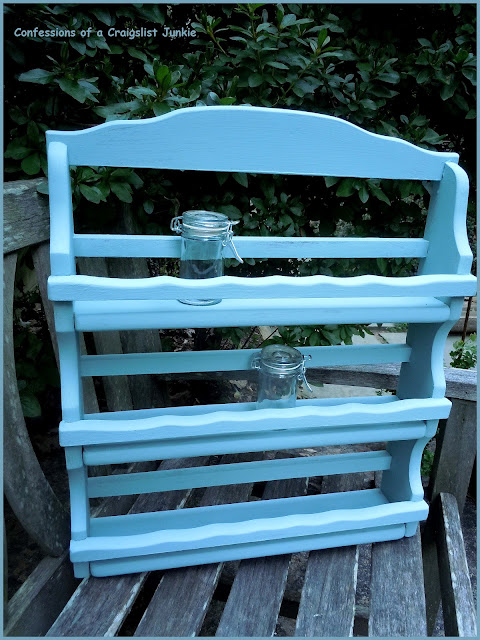 I think these pieces really are just ducky!

I'll let you know what the outcome of the space dilemma is as soon as I decide!

Posted by deborah@confessions of a craigslist junkie at 10:48 PM